A little while ago ......  OK, nearly three years ago, I started a Ju52 Floatplane project.  A couple of weeks ago I finished making it and got it underpainted.  Here is this weekend's work - the paint job.  Here goes: 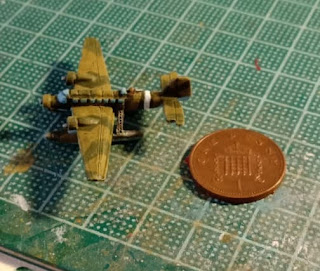 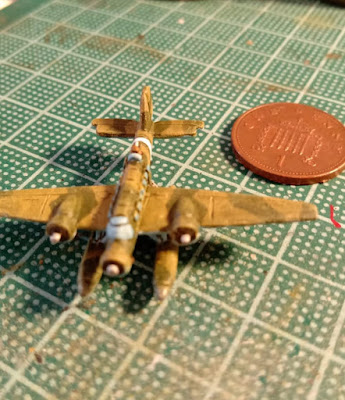 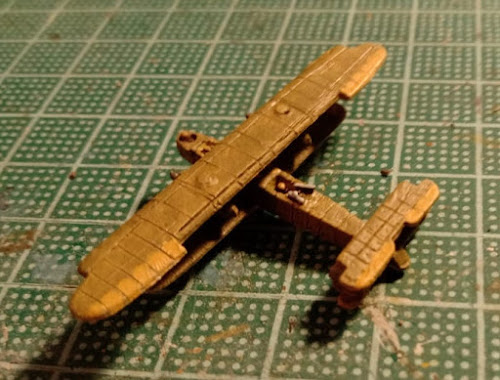 Halberstadt CL2 in camo fabric.  These were used to bomb targets from low level, so I added rear MG (of course!) and bomb racks for the gunner to drop on the Tommys! 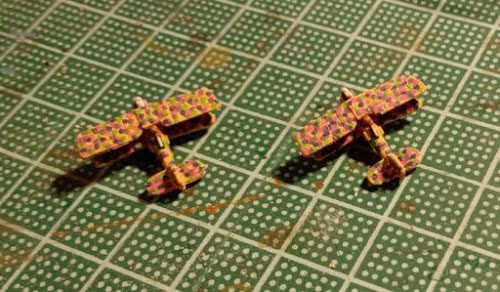 I am quite pleased with the "pointillist" camo result.
Once they have been gloss varnished I'll apply transfers (decals) and we'll see what the finished result looks like.
Posted by Colin Wilcock at 07:02 No comments:

Last night the six players and one umpire met again on Zoom to discuss the results of the game.
As Mark J wants to run the game again, I will not be posting detailed maps or pictures - sorry!
What I can tell you:
1) There was a lot of "fog of war".  It was an interesting contrast to the table top, where the players can usually see the opponents forces.  All participants reported hesitations due to scary terrain features that may/may not, have contained enemy (or friendlies).
2) One player had been in the army (and the RAF!), the rest of us were civilians in the real world.  He framed clear, concise orders....  the others of us did not always achieve this level of professionalism.
3) The Canadians - Mark S, Crispin, Me - won.  The Germans - John M, Chris P & Dave W......  claim that the results were a win...  of sorts!
4) It was fun!  As one participant commented "Rarely can continuous frustration have been so much fun." It was really good, seemed realistic to me.
My thanks go to "Team Canada", "Team Germany" and our hard pressed & hassled host - Mark J.
Posted by Colin Wilcock at 10:21 1 comment:

I often find that the enthusiasm needed to complete a project runs out a little before completion, so that i end up with boxes of unfinished this and that.  Last week I set to and finished a couple of projects that had been languishing....
The fourth European half timbered house - for Mark S: 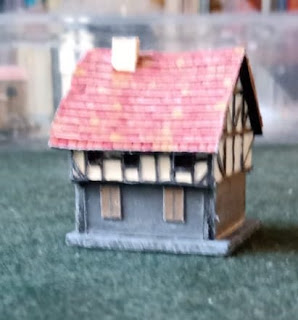 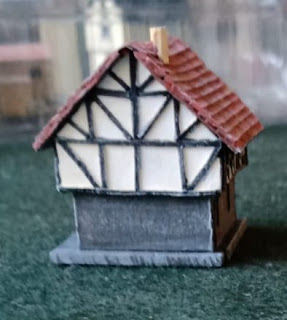 Just in case you are wondering, the roofs are strip tiled.  It takes longer, but the effect is well worth it.  Picture mount card for the walls, greetings card for the roof & timber strips.
A couple of nearly finished buildings for Aspern/Wagram type games: 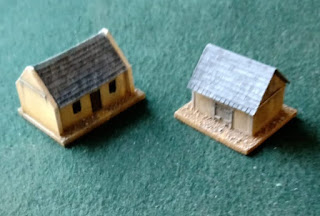 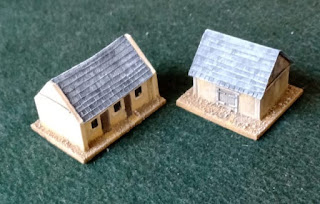 Finally, a 3 storey town house.  None of that medieval half timbering here - stucco walls are the latest fashion... 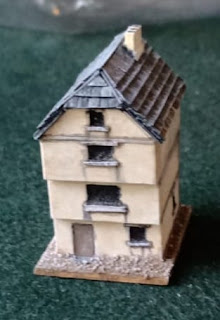 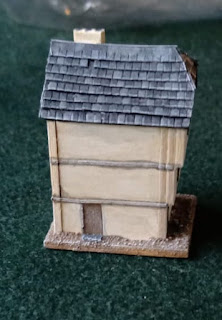 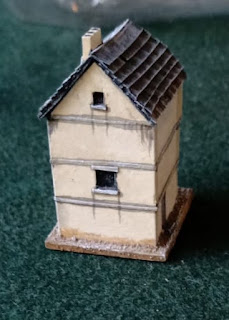 Email ThisBlogThis!Share to TwitterShare to FacebookShare to Pinterest
Labels: Wagram

Following the pictures of the WW2 1/300 La-7, I also completed two WW1 Fokker Dr 1 Triplanes.  My wife having recently found "Fall of the Red Baron", Leon Bennett, my choice of colour scheme was Von Richtofen himself, with a suitably liveried wingman.
The planes are 1/600 Tumbling Dice, with Dom's Decals 1/600 Modern Luftwaffe "Iron Cross" markings.  These seem to be "chunkier" than the 1/600 WW1 German Airforce decals, so I prefer them, especially on an all white background panel.
As the models are four parts (top wing, middle wing, fuselage & bottom wing, wheels), I drill a hole through all 4 parts and pin together, hopefully ensuring a better adhesion and more resilience to rough play!
Ok, waffling over - enjoy! 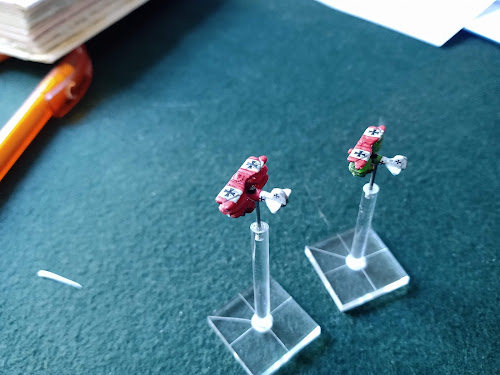 Posted by Colin Wilcock at 06:58 No comments:

The final turn of the Skalitz game.  Chris' BBB Blog has a summary on his  BBB Blog here. 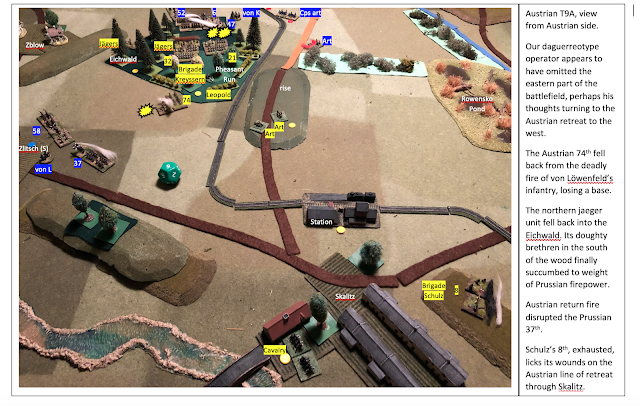 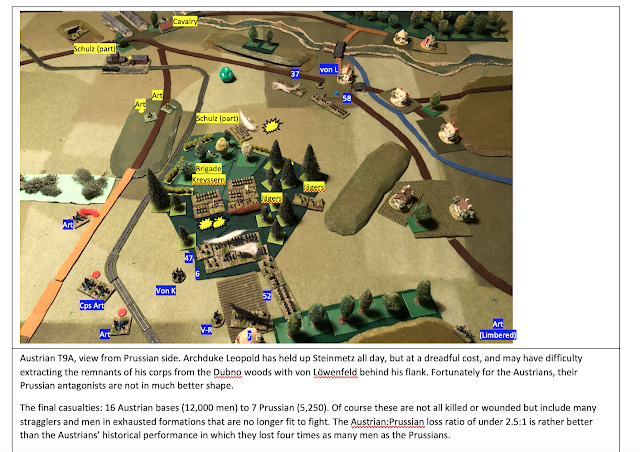 Posted by Colin Wilcock at 10:01 No comments:

The final Prussian turn - and we take an objective! 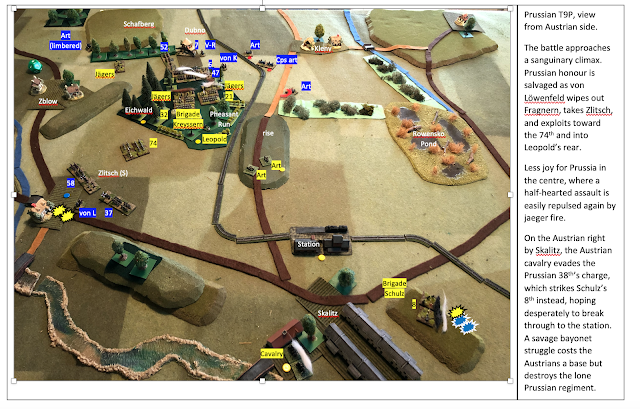 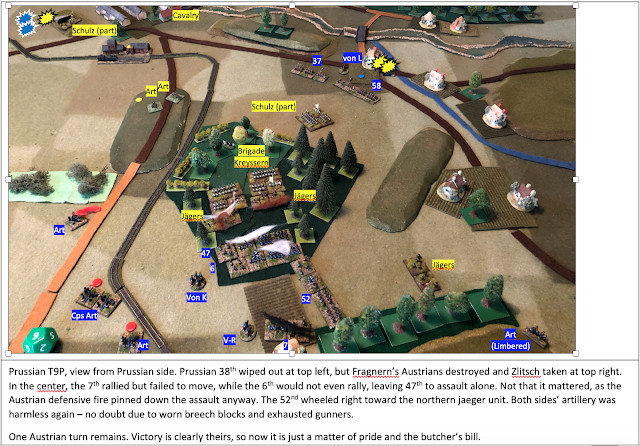 Posted by Colin Wilcock at 13:06 No comments:

Late last year we played Arcole (15-17 Nov 1796).  I provided both Austrians and some French, which got me musing on French Revolutionary armies.....   I did some research and found that Demi-Brigades had a huge variety of flags (using a palette of Red, White, Blue) with all sorts of geometric shapes.

Thus inspired, I invested in Napoleonic Baccus French in Bicornes, Infantry, Skirmishers, Artillery, Spanish Cavalry both Heavy & Mirlitons...   I also needed the Mirliton cavalry for Saxon Hussars, 1809 (missing from their page....), so tick that box as well.

Here are a few photos to show progress to date:

Infantry command units - many different flags....  The Infantry flags are "Napflags" from the internet. 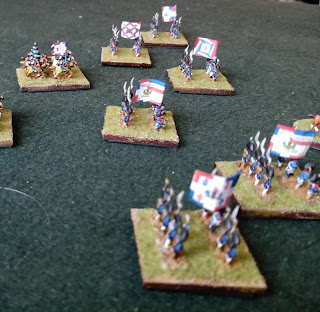 Hussars in Mirlitons.  The standard bearers are ordinary troopers that have their sword removed and half a pin inserted.

I was challenged by looking for what flags to use - not a lot of sources and what I had showed an attractive but complicated flag - then I found a whole sheet with cavalry, guard, etc.  A bit of resizing and "voila!"  1st & 2nd Hussars with flags. 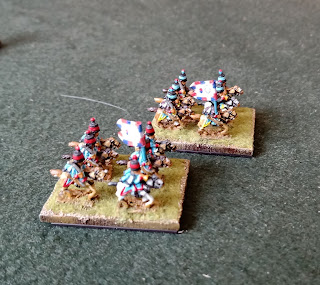 Generals - a SYW General, a Russian General & a Spanish Heavy cavalry officer.  All accompanied by a Guide d'Italie as Escort/Messenger. 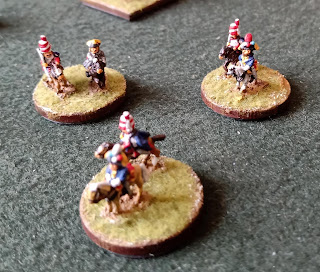 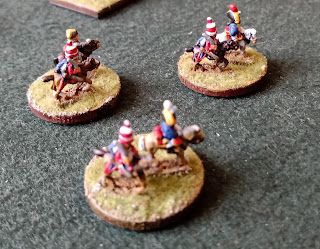 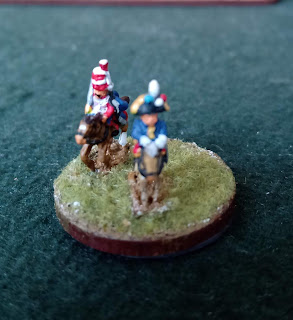 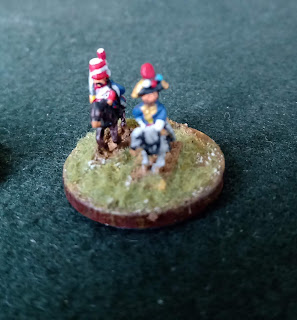 It seems that French Revolutionary Generals had three prominent Red, White & Blue Feathers (or feather pompoms) at the base of their plume.  I added three micro-beads plus a tall upright plume to get the desired effect.  The plume was a bayonet removed from a soldier's musket and inserted in a hole drilled in the Bicorne.  Photos a bit blurry - sorry!

I used the internet biographies on Wikipedia which have a number of suitably heroic looking Generals in French Revolutionary uniforms...

The SYW General has his Tricorne filed into a Bicorne and coat painted as a Greatcoat.

I trust that this has whetted your appetite.  Happy to share info & sources if you'd also like to add these colourful troops to your army. 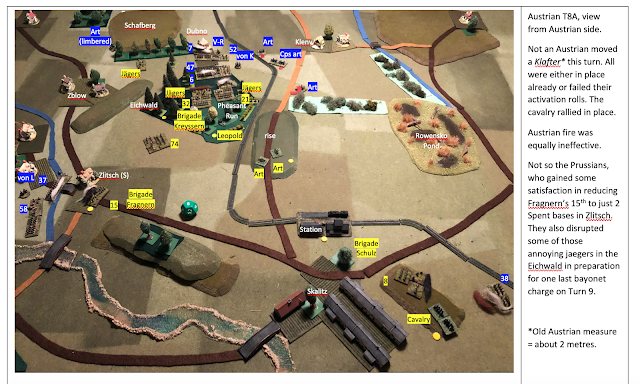 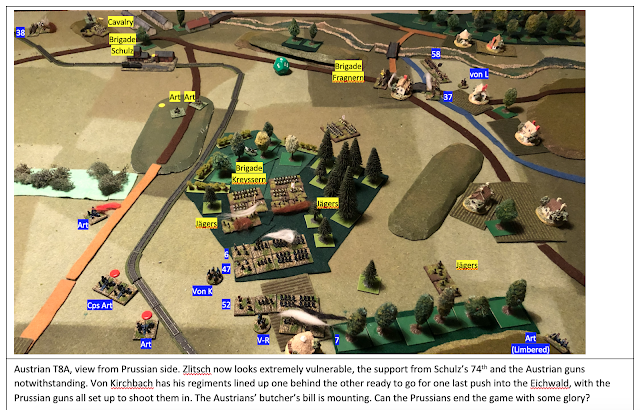 Posted by Colin Wilcock at 02:27 No comments: 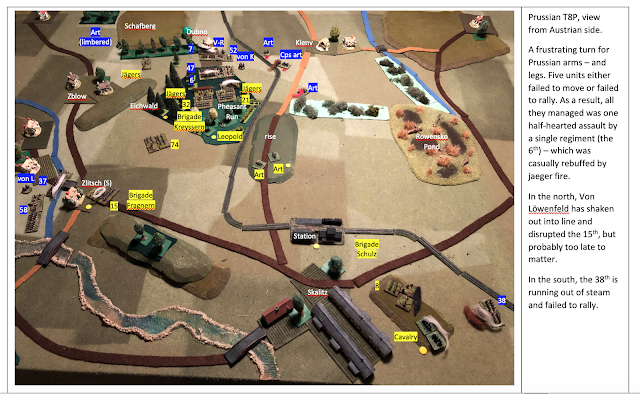 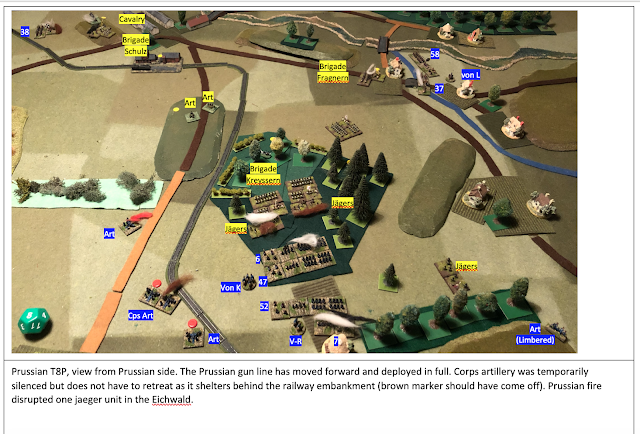 To summarise, it is still not going well for the Prussian steamroller.....

Posted by Colin Wilcock at 00:37 No comments: 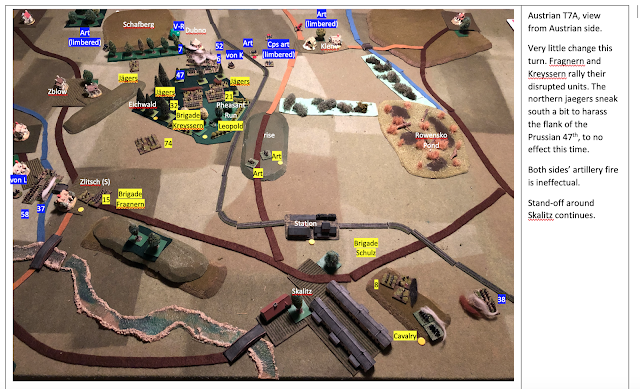 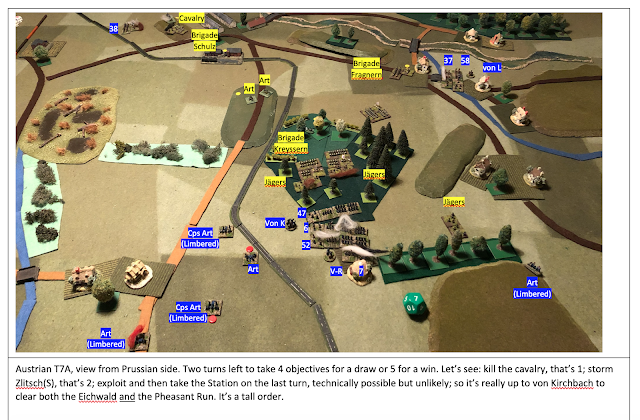 Posted by Colin Wilcock at 00:24 No comments: